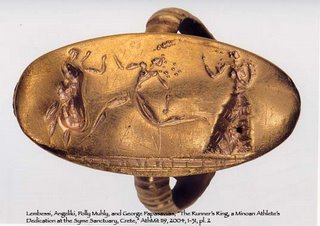 A few days ago, John Younger reported on Aegeanet the publication of a new Minoan gold ring.

"The ring comes from a disturbed deposit with Neopalatial sherds (some Postpalatial), and should be stylistically Knossian in manufacture and LM IA in date.

There are good iconographic parallels for everything but the runner - he is unique in Minoan-Mycenaean art (as the authors say, "the closest parallels ... occur on Panathenaic amphoras"); the authors do cite the stone rhyton fragment from Gypsades, Knossos, that has a nude male in motion with arms gesturing, but he is not exactly in the strenuous pose of the runner on the Syme ring.

The authors identify the ring as the personal dedication of a victor in a footrace."

To a nail, lost a war.(wow gold) In a particular press to see(wow power leveling) such a foreign Minyan: In order to (wow gold)receive a nail, we have lost a Mati Tie In order to(wow power leveling) get a piece of Mati Tie, we have lost a Pi Junma In order to get(wow gold) a Pijun Ma, we (wow power leveling)have lost a(wow gold) jockey; To be a jockey, we lost a war victory. This is the first (Rolex)under general Minyan At(World of Warcraft gold) first glance, but careful consideration, you(wow power leveling) will find that it contains a layer of the important essence of life: learn to give up, have a maturity. To a Mati Tie and eventually lead to (wow gold)lose a war, this is not know how early to give up the consequences.
Wise said: two disadvantages of the value comes light, the right to( World of Warcraft gold)
choose the two-phase benefit. A folder to be the tail of the gecko already know how to give up the tail, the preservation of(wow power leveling) life, let alone we are full of (power leveling)the wisdom of mankind? » ! In everyone's life, always (powerleveling)have in the face of choice, a choice, there is bound to give up, we have to learn is to( power leveling)pay a painful price, to give up local interests and preserve the overall interests. In chess, there are not "abandoning single-car" this trick? » As the saying goes: not old, not new. Sometimes, even (power leveling)the most precious things to know in good time to give up. When you( powerleveling)graduated from junior high school, in the face of a sincere friendship, you(powerleveling )will Yiyibushe. But think back, and only bid farewell to middle school, high school usher in a(rs gold )new life, can meet new friends. The recent shift is not on this? » Finally, a celebrity's life motto In( gold wow)conclusion:
Life is like theater, everyone is their own lives in the only director. Only Institute of choice, people will know how to give up the Chewu life, Xiaokan life, the life Habitat has Seasky.